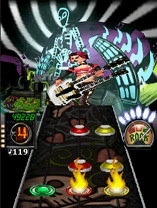 For gamers who can't get enough spastic button-mashing in the privacy of their own homes, Hands-On Mobile will soon be releasing their version of Guitar Hero for cellphones.

Based on the smash hit Activision franchise, Guitar Hero for mobiles will launch with 15 tracks from Guitar Hero II and Guitar Hero III: Legends of Rock, divided into four songs and an encore for each of three separate venues, with new songs being released enough month. The game will feature intuitive controls, adjustable difficuly levels, unlockable guitars and graphics taken straight from the original console version. Tracks shipping with Guitar Hero for mobiles include "Cherub Rock," "Hit Me With Your Best Shot," "Paranoid," "Woman," and "You Really Got Me."

"Guitar Hero for mobile will simply rock," said Hands-On Mobile Chief Technology Officer Michael Temkin. 'With an innovative way to get new songs and great mobile gameplay, this is a game people will play again and again."

According to a report on Ars Technica, details regarding a release date and which handsets the game will support have not been given, but mobile owners on participating carriers can text ROCK to 46966 for a free Guitar Hero wallpaper and notification of the game's release. More information is available at the Hands-On Mobile Guitar Hero website.