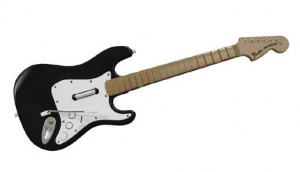 Following reports that it was blocking the release of a patch that would allow the use of Guitar Hero III controllers on the PlayStation 3 version of Rock Band, Activision has said that it is willing to discuss the matter if Harmonix is willing to write a check.

MTV and Harmonix claimed last week that the patch was in Sony's possession, but had been blocked from release by Activision. While Activision did not comment directly at the time, a representative from Guitar Hero 3 publisher RedOctane had expressed a lack of interest in such an arrangement in an earlier interview.

Activision spokeswoman Maryanne Lataif has now said her company is willing to negotiate an arrangement with Harmonix, but that the Rock Band developer is unwilling to meet their terms. "Unfortunately for Rock Band users, Harmonix has been unwilling to discuss an agreement that will allow us to provide that option in a manner that maintains the high standards people have come to expect from Activision," she told Boston.com, adding that any arrangement would hinge upon financial compensation. "We believe we should be compensated for the use of our technology," she said.

But Spencer Saltonstall of Harmonix said the company is trying to approach the matter based on what's best for its customers, and not the bottom line. "We are really and truly not looking at this from the financial standpoint," Saltonstall said. "We are looking at this from the consumer standpoint." And IDC analyst Billy Pidgeon said that while Activision may be entitled to payment for sharing their technology with Harmonix, the company's hard line could work against it in the long run by alienating gamers.