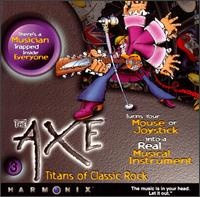 In a brief interview with Newsweek, Alex Rigopulos and Eran Egozy of Guitar Hero creator Harmonix said that just making a fun game isn't enough to succeed in the industry.

Discussing the company's early history of critical acclaim and commercial failure with their first release, The Axe: Titans of Classic Rock, as well as follow-ups Frequency and Amplitude, Rigopulos said, "It was a really hard lesson for us to realize that making a fun game just isn't enough for a game developer. We had to start thinking about making games that were easier to sell."

But following the company's alliance with RedOctane, a well-known game accessory company that had recently branched into publishing, the November 2005 release of Guitar Hero for the PlayStation 2 went on to be a huge hit, spawning the Guitar Hero franchise (now developed by several studios for publisher Activision, which acquired RedOctane in May 2006). "Our original mission statement was to bring the joy of music making to everyone out there in the world who may not necessarily have all the experience that comes from having learned a real instrument," said Egozy. "We had no idea that it would become this huge."