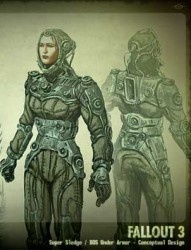 Bethesda Softworks has added a new entry to the Fallout 3 development diary, featuring a look at the Brotherhood of Steel.

The diary entry, by Fallout 3 lead designer Emil Pagliarulo, describes the establishment of the Brotherhood of Steel division in the Capital Wasteland, formerly Washington D.C., as well as its history and development over the past two decades. Cut off from the main Brotherhood camp on the west coast, the Capital Wasteland contingent is holding its own in a long war against Super Mutants but is slowly being worn down and forced to recruit from the willing but unprepared local population.

An excerpt from the dev diary reads, "In Fallout 3, the Brotherhood of Steel is one of the most important and influential factions you'll encounter. And while it's true they are a military organization, the Brotherhood's values and command structure are actually more representative of a medieval knightly order. Like the Templars of old, in their own eyes, the members of the Brotherhood of Steel are pure, they are just - they are truly human in a world filled with both physical and moral corruption."