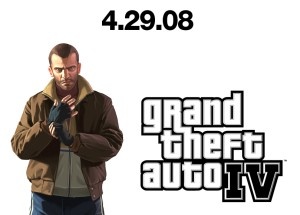 The latest chapter in the Grand Theft Auto series will hit store shelves worldwide on April 29, according to a statement released by the publisher. The game is being released on the Xbox 360 and PlayStation 3 and will be the first Grand Theft Auto title to appear on next-generation platforms.

"We are so excited to be releasing Grand Theft Auto IV," said Rockstar President and Grand Theft Auto Executive Producer Sam Houser. "We've pushed ourselves very hard to make something incredible and hope the game sets a new benchmark for interactive entertainment."

The game was originally scheduled for release on October 16, 2007, but in August 2007 the company announced it would be delayed until the second quarter of the 2008 fiscal year, which runs from February to April. Rockstar Chairman Strauss Zelnick said at the time the delay was the result of "almost strictly technological problems," but Wedbush Morgan analyst Michael Pachter had previously suggested Rockstar might delay the game in order to avoid competing with the release of Halo 3.

Jack Thompson has not yet issued comments or threats regarding the announcement, but will doubtlessly get around to it. More information is available at www.rockstargames.com/iv.