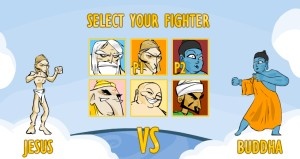 The religious strife that has plagued mankind throughout its history has moved to an all-new arena, as Italian Flash-game developer Molleindustria unleashes the ultimate inter-pantheon throw-down, Faith Fighter.

A two-dimensional Mortal Kombat-style fighting game, Faith Fighter features deities including God, Jesus, Ganesha, Buddha, Muhammad and Budai, each armed with traditional punch-kick-jump moves as well as special abilities unique to their religions. Players can select their favorite supreme being and engage in a ladder tournament, culminating in a match against a Secret Mystery Deity, to determine the One True Faith. Images of towns and cities rendered as backdrops to the fights suffer increasing devastation as each match progresses.

"Faith Fighter is the ultimate fighting game for these dark times," the game's website says. "Choose your belief and kick the shit out of your enemies. Give vent to your intolerance! Religious hate has never been so much fun."

The game itself, however, is somewhat more circumspect, opening with, "This game is not intended to be offensive towards any religion in particular. Its aim is to push the gamers to reflect on how the religions and sacred representations are often instrumentally used to fuel or justify conflicts between nations and people." In a concession to the violently insane gamer demographic, Faith Fighter also offers a censored mode which removes the face from the Muhammad character. Molleindustria asks gamers who would find the Prophet's depiction offensive to play the censored version, "Or better yet, don't play the game at all."

Molleindustria describes itself as "an Italian team of artists, designers and programmers that aims at starting a serious discussion about social and political implications of videogames," according to its website. "This will involve media activists, net-artists, habitual players and critics and detractors of videogames. We chose to start with online gaming in order to sidestep mainstream distribution channels and to overcome our lack of means. Using simple but sharp games we hope to give a starting point for a new generation of critical game developers and, above all, to experiment with practices that can be easily emulated and virally diffused." Faith Fighter is not Molleindustria's first take on a controversial subject; other games in the company's catalog include Operation: Pedopriest, Queer Power and the McDonald's Videogame, which promises to reveal "all the dirty secrets that made us one of the biggest company [sic] of the world."

Links to online and downloadable versions of Faith Fighter, as well as more information about the developer and its games, are available at the Molleindustria website.