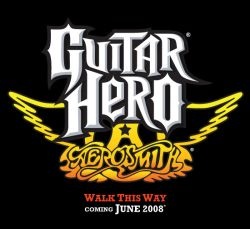 Guitar Hero: Aerosmith, the newest addition to Activision's hit franchise, is currently under development and scheduled for release in June, the company announced today.

Guitar Hero: Aerosmith will put players in the shoes of guitarists Joe Perry and Brad Whitford or bassist Tom Hamilton as they rock out across the entirety of the band's career, from their debut gig to their ascendance to the top. The game will include dozens of Aerosmith's biggest hits as well as tracks from related artists and venues from some of the band's biggest shows.

"Any band that can go from "Don't Want to Miss A Thing" to the ass-kicking "Sweet Emotion" to the cheekiness of "Love in an Elevator" to the classic ballad "Dream On" shows why Activision chose us to headline this game based on the diversity of the Aerosmith catalog," said band frontman Steven Tyler. "Not only is songwriting a bitch, but then it goes and has puppies."

"Having a game built around Aerosmith has been a huge honor and a really great experience for us. We've put a lot of ideas into the game so that fans can have fun interacting with our music, getting inside our body of work and learning about the band's history," guitarist Joe Perry added, somewhat more coherently. "It's great for rock since the record companies are struggling to make sense of how things are changing. Fans want to get and experience music in new formats - and there are going to be some of them who will play the game, then pick up the guitar for real and start bands. It's what's happening now, and it's only going to build more momentum in the future. It's a massive change for the music business."

Guitar Hero: Aerosmith is currently in development for the Wii, Xbox 360, PlayStation 2 and PlayStation 3. To celebrate the game's announcement, Activision is releasing the band's hit "Dream On" for Guitar Hero III: Legends of Rock for free from February 16-18 over Xbox Live Marketplace and the PlayStation Store.

"We are extremely excited that Aerosmith chose to team up with Guitar Hero, bringing one of the world's all-time best-selling artists together with one of the biggest videogame brands, to deliver a new and unique interactive way for our customers to connect with artists and their music," said Red Octane head of publishing Dusty Welch. "This partnership will give Aerosmith, a band that has sold more than 150 million albums worldwide, a powerful and innovative platform to reach their fans and new audiences."