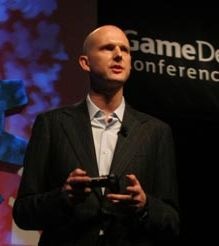 "As one of the founding members of SCE, Phil played a key role in the development and growth of the PlayStation business and our industry," said Sony Computer Entertainment Inc. President and CEO Kazuo Hirai, who will assume Harrison's responsibilities. "It is sad to see him departing from SCE, but I wish to express my gratitude for his many invaluable contributions and also wish Phil the very best of luck in his future endeavors."

"The past 15 years at Sony Computer Entertainment has been the defining journey of my life so far," Harrison said. "I am grateful to all the PlayStation family for their incredible support, guidance and friendship. It has been a privilege to serve as part of the team and be inspired by them on a daily basis. I am so proud of everything PlayStation has achieved and will continue to support its future in every way I can."

Although Harrison made no comments about his future plans, Joystiq has reported a rumor that he will be moving to take the helm at Atari. The troubled publisher is attempting to turn itself around in the face of ongoing losses and layoffs, and was recently reported to be looking for a new CEO.