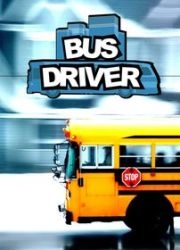 Bus Driver, the bus driving simulator that lets you drive a bus, will be hitting North American game store shelves in May.

Developed by SCS Software, best known for the 18 Wheels of Steel and Hunting Unlimited series, Bus Driver will require players to transport passengers around a realistic and attractively rendered city, obeying traffic rules and not upsetting or injuring passengers. The game will offer 12 detailed bus models, including school buses and London's famous double-deckers, and 30 routes of increasing difficulty. "Living roads," with intelligent AI-controlled traffic and a sophisticated system of traffic rules guarantee high replay value as gamers take kids to school, negotiate sight-seeing tours and even transport prisoners.

"When I first saw the name Bus Driver, I said... really?" said Steve Milburn, marketing director at Merdian4, who will be publishing the game in North America. "After playing the game and learning of SCS Software's heritage with games like Deer Hunter II and III and the successful 18 Wheels of Steel series, I knew that Bus Driver would be a hit with the right audience. Bus Driver will catch you off guard and have you obsessed within minutes."

Bus Driver was rated 3+ by PEGI for its European release. More information, including a free trial version of the game, is available at busdrivergame.com.