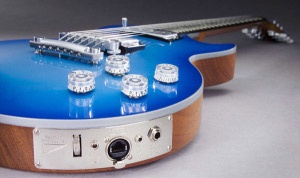 Gibson Guitar Corp. is waging a legal battle with industry behemoth Activision Inc. over a patent for the iconic Guitar Hero system.

The Nashville-based company says that Activision's title stands in violation of a decade-long patent for the virtual reality music system. Gibson had fired off a January 7 letter to Activision claiming it had not been fairly compensated.

Activision, in turn, has denied the claim and filed a lawsuit yesterday in Los Angeles.

"We believe their claims will not withstand any objective scrutiny," George Rose, Santa Monica-based Activision's general counsel, said in a statement.

Prior to the wrangling, Activision had signed a deal for Gibson's trademark in a license agreement the expiration date for which has not been disclosed.

One analyst said Gibson was betting on the assumption that its patent is of considerable value.

"Gibson clearly believes the patent could be worth a lot more than the royalties the company is already receiving from Activision," said Colin Sebastian, an analyst with Lazard Capital Markets.