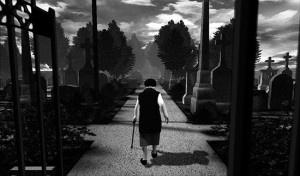 Tale of Tales has announced The Graveyard, a very short game now available for download.

Like most Tale of Tales releases, The Graveyard does not have a specific goal to be achieved, but is instead described as closer to "an explorable painting" built around an elderly woman's visit to a cemetery. Designers Auriea Harvey and Michael Samyn say The Graveyard is an experiment with what makes videogames appealing beyond traditional game experiences as part of their ongoing exploration of interactive media.

"We know that The Graveyard is not really a game. We could have easily added some form of gameplay. But The Graveyard wasn't designed just for the players to have fun," the designers said. "While it doesn't make a clear statement about anything, we hope that playing the game gives people the opportunity to contemplate the various topics that the experience touches upon. Not even to come to some kind of personal conclusion (though it's okay if you do). Just to think about death, and life, for a moment. It's good for the heart."

Tale of Tales is an independent, experimental development student located in Gent, Belgium. Other projects from the studio include The Endless Forest, a free-form MMOG and "social screensaver" in which everyone plays a deer, and The Path, a horror title currently slated for release in early 2009. The trial version of The Graveyard is available for download here; the full version, in which the main character can die during the course of gameplay, can be purchased for $5.00.

Stolen Pixels #117: The Path Will Take Her to The End Shamus Young 29 Comments