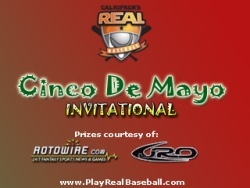 Registration for the Cinco de Mayo Invitational begins today and will remain open until May 4. The single-elimination tournament is offering over $2000 in prizes, including membership to RotoWire.com and JRO High Performance Sunglasses from Elite Eyewear. Each game in the tournament will run six innings, with seedings based on a first-come, first-seeded basis.

"We are excited to be hosting our first big tournament of the baseball season," said Andy Wang, founder and CEO of Cal Ripken's Real Baseball publisher Netamin. "Cal Ripken's Real Baseball brings videogaming and baseball to a whole new level. We hope players will continue enjoying the head to head competition not only with tournaments, but also all the other events we have to offer." Along with tournaments like the Cinco de Mayo Invitational, Real Baseball hosts other events throughout the year including home run derbies and rookie challenges, designed as fun and educational events for new players that will help get them ready for the big leagues.

Originally launched in 2005 as ESPN Ultimate Baseball Online, the game was rebranded as Cal Ripken's Real Baseball in 2007, with new features including a new stadium and uniforms, updated camp system, anti-hacking protection and modifications to the hitting system. Each position on the field is filled by a human-controller character that gains experience with each game played, allowing them to increase abilities such as speed, throwing and batting power. For more information about the free-to-play MMOSG, check out the official Cal Ripken's Real Baseball website.