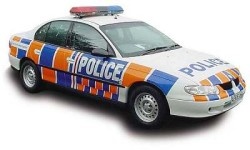 A New Zealand teenager is working on a mod to bring Grand Theft Auto: San Andreas to his home country, but may face legal hurdles along the way.

Stacy O'Callaghan of Wellington, New Zealand, is working on a Kiwi mod for the hit Rockstar game, which includes replacing the standard in-game police uniforms and cars with detailed models of those used in his country. According to a report in Stuff.co.nz, O'Callaghan's future plans for the mod include the addition of distinct New Zealand landmarks in place of the generically North American cityscape in the game. "We could use major landmarks like the Beehive, the Sky Tower or Cathedral Square," he said.

But the mod faces potential legal troubles from Section 51A of the country's Police Act, which forbids the unauthorized use of a police uniform. Although it's currently unclear how the regulations apply to videogames, police spokesman Jon Neilson said a legal team was investigating whether the mod contravened any rules regarding the use of police insignia.

"I am not doing this in any way to make money or sell this modification," said O'Callaghan, who is interested in a career in computer forensics. "It was originally for me because I got sick of all this American rubbish and wanted it to be more realistic."

"It's really just for fun and a chance to play it as if it was in New Zealand."