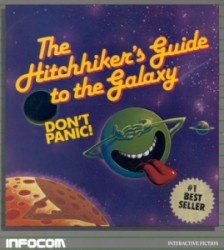 In a remarkable turn of events, Waxy.org has found itself in possession of the adventure gamer's Holy Grail: A complete backup of Infocom's shared network drive from 1989.

Delivered to Waxy owner Andy Baio, an independent journalist and programmer, by an "anonymous source close to the company," the drive contains design documents, email archives, sales figures, internal meeting notes and other materials, along with the source code and game files for every released and unreleased game Infocom ever made. Included among all that are two playable prototypes for the previously-unseen sequel to the Infocom classic Hitchhiker's Guide to the Galaxy, called Milliways: The Restaurant at the End of the Universe.

Baio has also pieced together a history of the game's aborted development from emails and notes contained on the drive, including exchanges between Infocom stalwarts such as Steve Meretzky, Marc Blank, Amy Briggs and others. In one 1985 email regarding the state of Bureaucracy, a Douglas Adams project that superseded the development of Milliways, Infocom co-founder Blank wrote, "In light of my discussions with Douglas yesterday and this afternoon at lunch, I cannot imagine finishing this game for 1985. Douglas' attitude seems to be less than I require in order to do a collaboration." Yet Infocom remained hesitant to "derail" the project for fear of causing delays in the development of "Hitchhiker's II."

Many Infocom alumni have commented on the newly-discovered archive, providing additional details, perspectives and corrections about the history of one of the industry's earliest groundbreaking developers. To view the released contents of the archive and try the Milliways prototype for yourself, grab your towel and pop over to Waxy.org.

Miracle of Sound: A Dog's Life (The Wolf Among Us Song) MiracleOfSound 6 Comments