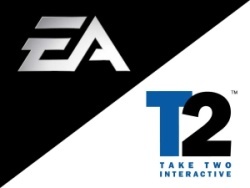 Electronic Arts says it doesn't need Take-Two and now claims the odds of a deal being done are "50/50."

The current deadline for EA's offer to acquire Take-Two Interactive expires on May 16 and Jeff Brown, EA's vice president of corporate communications, described the company's attitude as, "We're not desperate and there's a clock ticking."

Take-Two Chairman Strauss Zelnick recently said the phenomenal success of the Grand Theft Auto IV release "vindicated" his company's strategy of resisting the EA takeover attempt prior to the game's release, but Brown countered that statement, telling GamesIndustry that there was never any question about the game's success or its impact on the deal. "It's always been mystifying as to why they thought it was important to wait," he said. "Everybody knew [Grand Theft Auto IV] was going to be fantastic; everybody new it was going to sell like crazy. So to suggest anyone was surprised by the success of the game, commercial or critical, is nonsense."

Brown said EA's original intention was to complete the deal prior to the Christmas season so it could use the company's publishing muscle to push out more copies of the game than Take-Two could have managed on its own, but the longer the acquisition takes, the less feasible that becomes. "The passage of time serves to weaken the value and the certainty of this deal," he said. "I think it's at best a 50/50 proposition," he said, adding that Take-Two is "not a strategic priority for EA."

"We think [Take-Two's studios] are really great teams, that they're creative people, and we would very much like to give them a home and access to our publishing capability, but we just don't need it."