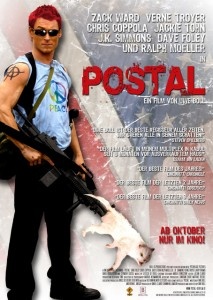 The cancellation of its U.S. distribution deal means that Postal, the latest addition to the Uwe Boll hit parade, will open on only four screens across the country.

In a statement released this morning, Boll claimed the cancellation was a politically-motivated boycott of his film over its controversial material. He had originally planned for a head-to-head confrontation with Indiana Jones and the Kingdom of the Crystal Skull, which he claimed he would "destroy," on 1500 screens beginning next weekend. "Theatrical distributors are boycotting Postal because of its political content," Boll said in a press release. "We were prepared to open on 1500 screens all across America on May 23rd. Any multiplex in the U.S. should have space for us, but they're afraid."

Even when Boll went so far as to attempt to rent screen space for his movie, he was denied. "We have even tried to buy a few screens in New York and Los Angeles, and they won't let us even rent the theaters!" he claimed. "I urge independent exhibitors to contact us and book Postal! Audiences have been expecting the film and I don't think exhibitors should censor what gets played in U.S. theaters."

The sad irony for Boll is that the patience of the mainstream movie industry appears to have run out just as he's made his least-bad movie ever. Its 29% score on Rotten Tomatoes makes it far and away his best-rated movie on the site, and a Film.com review said, "Postal is not a good film. It's not even close to a good film. But oddly enough it is catching a lot of people by surprise. Boll has actually set the bar so low that when he makes something that elicits at least one intentional laugh, people take notice."

Boll did not reveal which four (yes, four) theaters would be showing the movie.