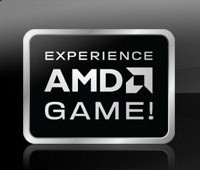 Based on figures from Jon Peddie Research, two-thirds of both desktop and notebook PCs sold last year did not have the technology to "drive a great gaming experience," one of the main factors behind the creation of AMD Game!. "With the support of industry leaders in PC gaming, AMD Game! ensures consumers don't need an enthusiast-level knowledge of PC hardware for an optimal gaming system," said AMD Senior Vice President Nigel Dessau. "We in the PC industry owe consumers the same predictability, simplicity and affordability in finding a PC for gaming that the console industry currently provides."

AMD has teamed with numerous component and peripheral manufacturers including Alienware, Microsoft and Logitech as part of the program, and says it intends to work closely with industry leaders to ensure PC configurations that are optimized for all types of users. The systems will employ the AMD Athlon, Phenom and upcoming Turion Ultra CPUs, along with AMD chipsets and ATI Radeon 3000 HD graphics to deliver a "simplified mainstream PC gaming experience."

AMD Game! certified systems are currently available from online system sellers including Alienware, Cyberpower, iBuypower, Maingear and Velocity Micro, with standard retail availability expected in the second half of 2008. To learn more about the new AMD Game! program, go to game.amd.com.