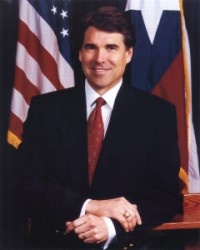 Texas Governor Rick Perry, who will deliver the keynote address at this year's E3, has stirred controversy by affirming the comments of a Cornerstone Church minister who said non-Christians will be condemned to Hell.

Governor Perry spent the majority of a 90-minute service at the San Antonio "megachurch" on the stage with Reverend John Hagee, who had invited a number of political candidates, primarily Republicans, to be introduced to the congregation. According to the Dallas Morning News, during the service Hagee said, "If you live your life and don't confess your sins to God almighty through the authority of Christ and his blood, I'm going to say this very plainly, you're going straight to Hell with a nonstop ticket." He also prodded his audience to fight "moral weakness," to vote for religious candidates and oppose same-sex marriage, saying, "God is the Supreme Court."

Perry said at a rally after the service that he believes in Biblical inerrancy, and that nothing said during the service struck him as out of line. Later in the day while at a different venue, Perry said, "I don't know that there's any human being that has the ability to interpret what God and his final decision-making is going to be. That's what the faith says. I understand, and my caveat there is that an all-knowing God certainly transcends my personal ability to make that judgment black and white."

"Before we get into Buddha and all the others, I get a little confused there," he continued. "But the fact is that we live in a pluralistic world but our faith is real personal. And my Christian faith teaches that the way is through Jesus Christ."

Perry's comments are particularly salient to gamers in light of his selection as keynote speaker at this year's E3 Media and Business Summit in July. ESA President Michael Gallagher, who declined to deliver the keynote himself for the second year in a row, cited Governor Perry's "forward-thinking leadership" in encouraging the growth of the videogame industry in Texas as the reason for his selection, comments he made despite a law signed into effect in 2007 that denies financial incentives to developers who produce games with "inappropriate content."