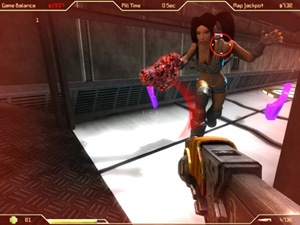 Kwari, an online FPS in which players used real money to buy ammunition and bet on the outcome of matches, has been shut down.

Launched in January, the sci-fi multiplayer FPS was available as a free download, but required players to create accounts and make real-money purchases of ammo in order to play. Gamers could also earn money making microtransaction wagers on the outcome of matches, with varying stakes depending on the game type. The game suffered from poor reviews, however, with PC Gamer UK saying "it feels like a weak Quake II clone" while PC Zone called it an "inferior, dated mess," and the real-money model failed to gain much traction with gamers.

Kwari Limited, the publisher behind the game, has gone into receivership and ceased all operations following the game's European release on January 7, according to a GamesIndustry report. In an interview prior to the launch of the game, Kwari Marketing Manager Al King said he was "bullish" on the future of the game, despite the failure of similar real-money tournament sites like Tournament.com.

"We empathize with that event, but we're looking at it to see what that's saying about the sector we're in. Are we in exactly the same sector? You could say yes or no, depending on how widely you define it," he said.

"But we've not been made overly nervous by them closing down, and we don't see that as a thumbs-down to the skill-based gaming sector, or indeed games involving money," he continued. "We just think there are probably factors which we don't have insight to which were probably behind that, and we hope they bounce back."

There is currently no word about how, or even if, money owed to players will be paid. The Kwari.com website is currently down, and the fansite Kwaricash.com was last updated with news on April 16.

Unskippable: Call of Duty: Advanced Warfare - Inserting in the LZ Down and Dirty Graham_LRR 11 Comments
Comments on