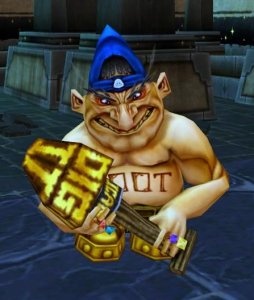 MMOG heavyweight NCsoft is preparing to unleash the Next Big Thing in online gaming: The ultimate evolution of convenience and poop known as the Bling Gnome.

An upcoming addition to the popular MMOG Dungeon Runners, the Bling Gnome is a "tricked-up helper gnome with a bit of attitude" that will follow characters in the game and automatically pick up all the player's dropped gold. The handy little tag-along also has the ability to pick up items of "rare" quality or lower - but instead of simply storing them for the player as a secondary inventory, the Bling Gnome actually eats the items, converting them to gold and saving players the trouble of running to Townston to sell them.

But where does that gold come from, you may ask? As part of the natural, albeit greatly hastened, digestive process, the Bling Gnome poops it out for you! I am not making this up: The Bling Gnome eats items and poops gold.

But that's not all! Occasionally, during the process of turning crap items into crapped gold, the Bling Gnome will squeeze out powerful, high-level items in "rather spectacular fashion." The more items collected by the Gnome at one time, the greater the chance the tiny turdmeister will issue forth something truly pooptastic.

The Bling Gnome is coming on June 24 as part of a new Dungeon Runners retail release, which will also feature a discounted price on six months' premium membership in the game. For more information, head over to Dungeonrunners.com - and do watch where you step.