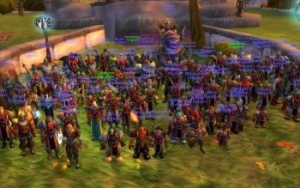 PC gaming may not be dead but you sure wouldn't know it based on this year's E3, according to Microsoft's Kevin Unangst, who described the event as a "console show."

In an article on VentureBeat, Dean Takahashi says the event has come to focus almost entirely on console games over recent years, pointing out that even PC gaming stalwarts Microsoft and Intel are having little to do with the 2008 show. Intel won't be holding any press conferences this year, while Microsoft elected to display its PC titles at an event in San Francisco this week, rather than risk being lost in the console crowd.

"As it has morphed, E3 has fundamentally become a console show," said Unangst, Microsoft's senior global director of Windows gaming. "We didn't want to just squeeze out some time at a console show."

The new console-centric attitude is largely the result of E3's transformation from the year's biggest, most anticipated gaming event to its current status as a press-only show with just a few thousand in attendance. The smaller scale has greatly reduced the cost of the event but also tightened the focus on high-profile products. Also impacting the presence of PC games at the show are the current troubles at the ESA, which has seen the recent departure of several members. Some will still attend the show, but others have dropped out entirely or will be holding parallel events of their own.

Unangst said that even with the reduced numbers in attendance, it's tough for PC titles to attract much attention. The Games for Windows division will hold a "small reception" at the show on July 16, but Microsoft is throwing its real effort behind the Xbox 360. Still, Unangst remained upbeat about the future of the PC platform, saying, "There have been a lot of trend pieces about how PC gaming is dying when that is absolutely not happening. It's growing exponentially, thanks to online games, and even faster than the rest of the market."

But Rahul Sood, chief of the VoodooPC game computer division at Hewlett-Packard, remains unimpressed by the "new" E3 and won't be attending. "E3 used to be the mecca of gaming," he said. "I'm skipping it because it's not what it used to be. Now it's just an event called E3."