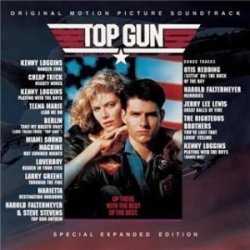 Do you feel the need for speed? Or is that just yesterday's meatloaf fighting back? Either way, a strong stomach will come in handy following the news that Activision is marking July 4th by giving away the "Top Gun Anthem" for Guitar Hero III: Legends of Rock.

Beginning July 3, the award-winning instrumental track from the hit Tom Cruise vehicle will be given away via the Xbox Live Marketplace and the PlayStation Store to mark the U.S. Independence Day holiday on July 4. It was on that date in 1776 that King George III said to his Prime Minister Lord North, "They're doing what? Okay, screw this, we're outta here." Activision declined to comment on rumors that the promotion was inspired by a bet in the marketing department that "you can't give this shit away."

Performed by former Billy Idol guitarist Steve Stevens and Harold Faltermeyer of "Axel F" fame, both of whom are respected musicians whose involvement in the project is completely unfathomable, the "award-winning" track did actually win an award: The Grammy Award for Best Pop Instrumental Performance in 1987, a year in which there was apparently an alarming shortage of pop instrumental performances. An Activision executive who wished to remain anonymous was quoted as saying, "HA! Take that, suckers!"

Activision's very real giveaway of the "Top Gun Anthem" for Guitar Hero III: Legends of Rock really does begin on July 3. If you want to bear witness to the horror ahead of time, check out the "Top Gun Anthem" video on Youtube. Take note: There's enough distilled 80s in that link to kill an elephant. You've been warned.