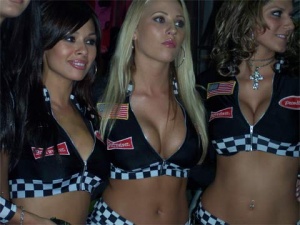 E3 is once again upon us, and just because most of us can't go doesn't mean we can't sit around and make fun of all the event's low points.

The good people at GamePro have assembled a list of Eight Extremely Embarrassing E3 Moments, and while nobody dies or ends up naked, bad choices, bad timing and occasionally just pure bad luck have conspired over the years to take the wind out of a lot of sails. Most of the events are relatively recent, such as the removal of booth babes in 2006 or Sony's "Press Conference of Fail" in the same year, but 1995 is mentioned for the unfortunate debut of the Sega Saturn, which was hammered by the PlayStation, and the Virtual Boy, which turned out to be Nintendo's biggest console flop ever.

While most of the "moments" aren't terribly hard to watch (or read about), the 2007 presentation by alleged comedian Jamie Kennedy, who was hired by Activision to host the company's press conference, is truly cringe-worthy. Kennedy looks dazed, and is presumably wasted, as he awkwardly stumbles through an embarrassing, flat routine that only picks up when the guests - or the crowd - slip in a shot about how ugly the whole thing is.

So if you can't attend E3 this year, you can at least take some solace in knowing that you're avoiding some inevitable suck by staying home and doing something else. On the other hand, if watching people step in dog crap is your idea of a good time, you can check out GamePro's entire list of E3 lowlights over the years here.