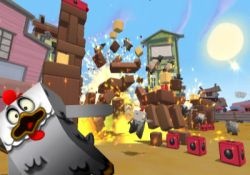 Despite its slow start, EA chief John Riccitiello isn't worried about the success of Boom Blox, saying it has a long-term durability comparable to the Pink Floyd classic Dark Side of the Moon.

Boom Blox was highly-touted by publisher Electronic Arts prior to its release, primarily due to the involvement of Steven Spielberg, the famed movie director who entered into a three-title development deal with EA in 2005. Despite his high-profile presence, however, Boom Blox did not fare overly well when it was released, racking up only 60,000 unit sales in May and coming in ninth in the list of top-selling games for the Wii.

But in Riccitiello's eyes, there's nothing to worry about. He believes the game will prove durable over the long run, and goes so far as to suggest a sequel isn't out of the question.

"First off, we had a week's sales with no advertising. Last time I checked MTV wasn't a financial network, but... it met our expectations," Riccitello told MTV Multiplayer. "Boom Blox was a competent seller in the month it was introduced and only had a week of sales without advertising. So it's doing actually quite well. We haven't announced a sequel, but I would tell you that I certainly am curious [about making one]. It's a hit title."

"Given that you come from a music network, I think Boom Blox is going to be the Pink Floyd's Dark Side of the Moon for games," he continued. "It's going to last a long time. I think it's going to be a favorite for a long time. If you haven't picked it up there's really nothing like it out there... frankly, I'm addicted to it. My kids are into it. It's a great title."

Released in 1973, Pink Floyd's magnum opus spent only one week at the top of the Billboard 200, but achieved legendary status for going on to spend a record-setting 741 consecutive weeks on the charts, selling over 40 million copies in the process.