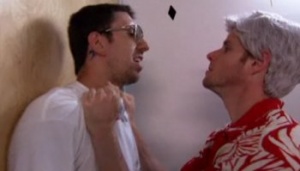 After years of denials, the videogame industry has been forced to admit a shocking truth: Jack Thompson was right!

Despite numerous victories in court that have repeatedly affirmed the First Amendment rights of videogames as a medium equivalent to books, movies and music, G4 is reporting that stunning new evidence has emerged offering incontrovertible proof that Jack "The Hammer" Thompson, an attorney who has fought to preserve the purity and innocence of today's youth, has been right all along. Gamers of all ages and stripes are rampaging in the streets, wielding baseball bats, pistols, machine guns and automobiles in an anarchic war that threatens to spiral out of control, leading one pundit to say, "The world is turning into Grand Theft Auto." Authorities claim that in one major U.S. city, at least ten prostitutes have been murdered with baseball bats in as many hours.

Fortunately, Thompson has agreed to come to the defense of civilization, meeting the hordes of frenzied gamers head-on, backed up by the resources of the U.S. government's Department of Homeland Security. Thompson, who's younger brother Timmy died in 1979 at the hands of two crazed Pong players who continually batted him back and forth, and back and forth, and back and forth until his neck snapped like a twig, has been preparing for this videogame Ragnarok since before the release of the original Grand Theft Auto, and now stands as society's sole hope for a return to decency.

This breaking report, featuring a newly-buff Thompson with a "big-ass tattoo," is available exclusively at G4TV.com.