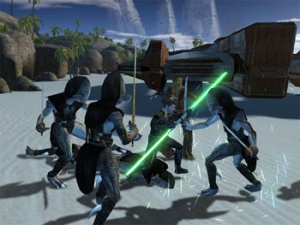 Electronic Arts boss John Riccitiello has confirmed one of the worst-kept secrets in the industry: A Knights of the Old Republic MMOG is on the way.

Riccitiello spoke about EA's MMOG amibitions with Portfolio.com at E3 this week, claiming his company had an interest in World of Warcraft prior to Activision's merger with Vivendi. It didn't work out, he claimed, "Because [Vivendi] couldn't afford control of EA, and I wasn't giving it up."

Instead, EA will make its move into the MMOG market via BioWare, which it acquired in October 2007. BioWare announced a deal with LucasArts in the same month to develop an "interactive entertainment product," leading to widespread speculation that a KOTOR-based MMOG was in the works.

Speaking about the upcoming Warhammer Online: Age of Reckoning from Mythic as well as the new project, Riccitiello said, "We've got two of the most compelling MMOs in the industry in development. And the one that people are dying for us to talk to them about - in partnership with LucasArts, coming out of BioWare, which is, I think quite possibly the most anticipated game, full stop, for the industry, at the point where we get closer to telling you about it." Asked directly whether he was referring to a KOTOR MMOG, he said, "Yes."

Even though no release target has been announced, it will be interesting to see how this affects Star Wars Galaxies, the original Star Wars-based MMOG developed by Sony and released in 2003. Despite the popularity of the Star Wars franchise, Star Wars Galaxies never lived up to expectations, suffering from soft subscription numbers that have reportedly been in decline for the past few years. Knights of the Old Republic, originally launched in 2003 as a stand-alone RPG, maintains virtually all elements of the Star Wars universe but is set 4000 years prior to the events detailed in the movies, thereby allowing the creators to bypass the George Lucas' increasingly crappy, juvenile stories.