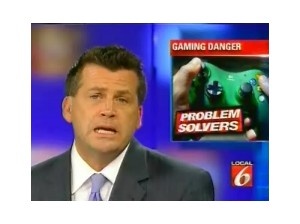 An Orlando CBS News affiliate is warning that child predators are offering game points in exchange for nude photos of children through internet-connected videogames.

In a report by Local 6 News, Florida Attorney General Cybercrime Detective Lieutenant David Maurer said, "Kids are playing games, and they are being asked to take photos of themselves naked in order to get game points. There is not only the chatting version of the games but also a webcam involved."

"My theory on it is that predators are going to go where kids are, and kids are playing videogames so it's a perfect place for them to be," he continued, explaining how his personal misgivings and complete lack of comprehension regarding videogames translated into iron-clad statements designed to elicit the greatest possible alarm from equally uninformed parents. At least one of those parents, Alida Magana, reacted predictably, revealing a blend of parental concern and mind-boggling ignorance by saying, "You think they're just watching a game, and like you said, I didn't really know they could actually get through the games and play a lot of people."

Local 6 reporter Donald Forbes said that at any time, "There can be 50 to 300,000 people online playing the most popular Internet-connected games," a number seemingly as random as the statements made by Maurer and Magana. Games cited by Forbes as being popular with children today include Halo 3, Call To Duty [sic], Final Fantasy and Grand Theft Auto. And while the majority of gamers online only want to play some games, according to the report, "Some of them are looking for more than just gaming action."

The video report accompanying the article is as compelling and informative as one would expect, saying that children on the Xbox 360, PlayStation 3 and "even Wii" are at risk and using extended video clips from World of Warcraft mixed with shots of kids talking over Xbox headsets to make the point. Parental controls, a fixture on all three console systems, are just barely touched on, while the fact that only certain games can use cameras at all is completely ignored.

It all may sound like a joke, particularly coming from a man who sounds suspiciously like a coworker of Sergeant Frank Drebin, Detective Lieutenant, Police Squad, but the sad truth is that this is a serious report made by a very real news outlet in Orlanda, Florida. We've sent a request to the station for more details about the story, including an explanation of what the hell "game points" actually are; while we wait for a response, you can check out the horror for yourself at local6.com.