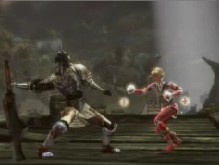 Auran has announced that Fury, the troubled PvP MMOG that launched in November 2007, is being shut down.

In a message posted on the official Fury forum, the company wrote, "We have reached our time limit to find a solution that would help us keep the Fury servers open. Sadly, no solution has been found and so we have no alternative than to shut the servers down in 48 hours. To all those players who have enjoyed Fury and played countless battles, I am sorry that we could not find a viable business model that would allow you to continue playing."

"To the Auran team, who put their heart and soul into making Fury, thanks for your efforts," the message continued. "As I said many times before, we need to be much better than the competition to have a chance of succeeding. We gave it everything we had and history now judges that it still wasn't good enough."

Despite its unique approach to multiplayer gaming, Fury was never able to achieve the audience critical mass that would have allowed it to stay viable. Auran attempted to regain the interest of players who were unimpressed with the game's beta by announcing a free 10-day trial offer soon after the game's launch in order to show off the numerous post-beta improvements, but only a month later the company was reported to be suffering from serious financial troubles as a result of Fury's failure. A "free-to-play" mode was added in December, but Auran collapsed a few days later.

The official announcement of Fury's demise can be read here, at least for the next day or so; Auran intends to shut down the forum website along with the game servers.

Escape to the Movies: Fury - Tank You Very Much MovieBob 60 Comments