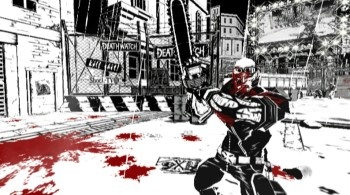 The Daily Mail has criticized the pending release of MadWorld on the Wii, saying the launch of the "most violent videogame ever" on the system will utterly transform its family-friendly image.

Describing the "hack and slash" game as one in which players can "impale enemies on road signs, rip out hearts and execute them with weapons including chainsaws and daggers," the article says the pending release of a violent game on the Nintendo console has shocked anti-violence groups. The game has not yet been rated by the BBFC, and Mediawatch-uk Director John Beyer hopes it stays that way.

"I hope the British Board of Film Classification will view this with concern and decide it should not be granted a classification," he said. "Without that it cannot be marketed in Britain. What the rest of the world does is up to them. We need to ensure that modern and civilized values take priority rather than killing and maiming people."

"It seems a shame that the game's manufacturer have decided to exclusively release this game on the Wii," he added. "I believe it will spoil the family fun image of the Wii."

In MadWorld, players take the role of Jack, trapped in the twisted terror of Death Watch, a "game show" concocted by a group of terrorists who have overtaken the virtual world of Varrigan City. To survive and solve the mystery of Death Watch, players must master the use of weapons and other items and "compete in ultra-violent mini-games designed to push you over the edge." In a style reminiscent of Frank Miller's Sin City and 300, the game is presented entirely in black and white, except for blood, which is depicted in stark red.

The game is something of a departure from the usual Wii fare, but a Nintendo representative claimed the game is simply representative of the wide appeal of the system. "Wii appeals to a wide range of audiences from children and teenagers to adults and senior citizens, anyone from five to 95, as such there is a wide range of content for all ages and tastes available," he said. "MadWorld will be suitably age rated through the appropriate legal channels and thus only available to an audience above the age rating it is given."

MadWorld is being developed by Sega, exclusively for the Nintendo Wii, and is slated for release in early 2009. For more information, check out the official MadWorld website.