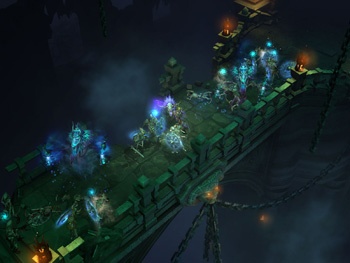 One character they won't be bringing in, however, is the Necromancer, despite its popularity with fans of the series. Explaining that the development team was more interested in creating new gameplay than in rehashing old characters, Wilson said, "The problem was, we looked at the [Necromancer] class and didn't think that we could really make him a lot better. We could add some new stuff to him but for the most part - curses, corpse explosion, skeleton pets - done. That's the class. We wanted to create new gameplay, so we chose to do the Witch Doctor as a different kind of class."

Even so, the Necromancer's role in the battle against the Prime Evils may not be over: Wilson said the character could very well make a return in a future expansion pack, a decision that would be driven by members of the development team as much as by fans. "There's a lot of people on our team who aren't happy with our class choices," Wilson revealed. "But after we've established Diablo III as its own game with its own type of gameplay and experiences, I wouldn't be opposed to looking at old classes. We are trying to design [the Witch Doctor] class so that if we did bring back the Necromancer, there's room for him. We're looking out ahead of time at what our expansions are going to be, so we've got to keep room open for some of those other classes down the road."

And if not in an expansion, then perhaps even further down the road; Wilson said that despite the end of the trilogy, Diablo will carry on. "We're not saying this is the end of the Diablo universe, but we are trying to bring this storyline to a close," he added. "It's not just Diablo III - we've got plans beyond."