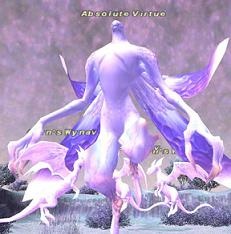 When the top clan in an MMOG has failed to finish a final boss after 18 hours of nonstop fighting, perhaps the battle difficulty should be scaled back a bit.

Linkshells, Final Fantasy XI's versions of guilds and clans from other massively-multiplayer role-playing games, are the online families for many of the game's most dedicated players. These participants are the types of people who would be willing to sit down for 18 hours to fight some of the highest level villains in FFXI, which releases updates to entertain its audience with grueling boss challenges.

Beyond the Limitation, a Linkshell noted for being the first group to down previous baddie Absolute Virtue, attempted the latest of Square Enix's monsters, Pandemonium Warden. With over twenty different forms, Beyond the Limitation sought to topple the digital titan, only to throw its hands up after eighteen hours of gameplay as the health risks to its players began to mount.

"People were passing out and getting physically ill. We decided to end it before we risked turning into a horrible new story about how video games ruin people's lives," said Beyond the Limitation member Sylphet.

The fight caused vomiting and fainting among Beyond the Limitation's ranks.

Before loading the game, Square Enix displays a health warning: "During your time here, you will be able to talk, join and adventure with many other individuals in an experience that is unique to online games.

That being said, we have no desire to see your real life suffer as a consequence. Don't forget your family, your friends, your school, or your work."

Square Enix's sentiment might be good, but the development of an 18-hour-plus nearly unbeatable boss would imply that the studio wants players to spend unreasonable hours playing the game.

Sylphet concluded, "We are one of very few LS who have killed AV (not using the wall trick) so we know quite well what is futile and what is not. None of us doubt that PW can be killed. We just call into question exactly what the development team thinks is reasonable from human beings."

Should Square Enix stop extending the length of gameplay to unhealthy limits or is it up to the individuals involved to stop themselves?

Gallery of the Day: 8 of the Most Awesome MMO Boss Fights ffronw 25 Comments
Comments on