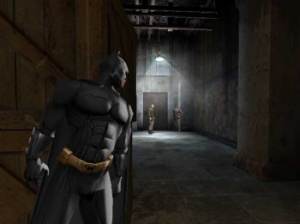 Eidos Interactive and Warner Bros. Interactive Entertainment are hopping aboard the Batman train with the announcement of Batman: Arkham Asylum, a "dark, action-packed" game that actually has nothing to do with the movie.

Players will don the cape and cowl of the World's Greatest Detective as he once again delivers the Joker to the Arkham Asylum, Gotham's famed, sieve-like institution for the criminally insane. But inside, the imprisoned super-villains have taken over and set a trap for the Caped Crusader, forcing him to battle the city's worst criminals not only for survival, but also to ensure their fiendish rampage does not spread beyond the walls of Arkham.

According to an upcoming preview of the game by Game Informer, Batman: Arkham Asylum is "reminiscent of BioShock," and will present a "true-to-character Batman game" set in Gotham City's darkest location. The game's story is co-written by Emmy-award winner Paul Dini, who has written scripts for Batman: The Animated Series and many other DC animated properties, as well as Tiny Toon Adventures, Duck Dodgers and Animaniacs.

The game that was intended as a movie tie-in, meanwhile, apparently won't be hitting the shelves at all. An Associated Press report says the Dark Knight videogame in development at EA's Pandemic Studios has been shut down over quality concerns, controversy surrounding the death of Heath Ledger and unimpressive sales projections. Batman Begins, EA's videogame based on the 2005 movie of the same name, sold less than 600,000 copies despite the popularity in the movie, a failure which may also have contributed to the decision; industry analyst Michael Pachter also said the tremendous success of The Dark Knight movie, above and beyond normal summer blockbuster fare, may have taken EA executives by surprise.

"I think publishers have concluded the only games that work are the surefire $500 million box office kind of games like Spider-Man and Shrek," Pachter said. "The Transformers game really surprised people how well it did, but the movie was big. I don't think they expected The Dark Knight movie to be this big."

While it may seem unusual for Eidos and WBIE to dive into a Batman game that's not a movie translation, it could work out very well for everyone involved: The publishers get to take advantage of the summer Bat-mania, and gamers can take hope from the knowledge that it's not the slapdash garbage usually associated with movie-based videogames, and therefore might actually not suck. Batman: Arkham Asylum is in development for the Xbox 360, PlayStation 3 and PC, and will hit the shelves sometime in 2009.