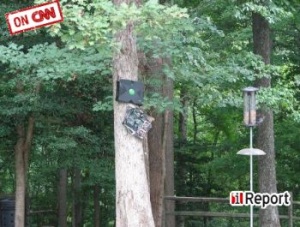 A frustrated father has taken an entertaining if somewhat irrational approach to his children's discipline by nailing their Xbox to a tree.

CNN's iReport has the story about a family man who got tired of listening to the crapola flying between his three sons as they played their Xbox. Although it's unclear whether the boys were fighting over who got to play or how badly they were playing, one thing is unmistakable: When this man of action says he's going to nail something to a tree, he means it.

"My husband had repeatedly warned our three boys about their behavior while playing the Xbox," their mother reported in her iReport report. "Tuesday after I arrived home from work, our oldest son told me to look in the backyard at 'Dad's artwork.' Well, I wasn't surprised to see the Xbox proudly displayed on the nearest tree." She concluded her report with an enthusiastic, "Way to go Honey!!!!!"

I'm not so sure that nailing consumer electronics to nearby trees is the best way to deal with unruly boys, but based on his wife's apparent lack of surprise I do give the guy credit for following through on what he's likely been threatening to do for some time. In that sense, he reminds me of my own dad, who is an ardent believer in the "threaten, then clobber" school of parenting.

And despite this display of burned fuses and primitive woodland augmentation, I have a very strong suspicion that the kids have probably found something else to fight about by now. Boys, after all, will be boys.