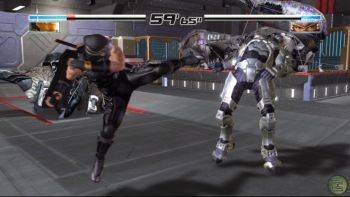 Tecmo has announced the resignation of president Yoshimi Yasuda, which would hardly be worth commenting on if it weren't for the many questions surrounding his role in the company's troubles with Dead or Alive and Ninja Gaiden creator Tomonobu Itagaki and Team Ninja.

The resignation, set to take effect September 1, is for "personal reasons," according to a statement by the company, but a report by Kotaku suggests Tecmo may not be too sorry to see Yasuda go. A lawsuit brought by Itagaki against the company alleges "special incentive" bonuses for the development of Dead or Alive 4 were never paid, and also that Yasuda had disrupted the work environment at Team Ninja by making "demeaning remarks" to Itagaki's coworkers.

Tecmo originally claimed that the bonuses sought by Itagaki were approved solely by the previous president and without the approval by the board of directors; unfortunately for them, a recording of a conversation between Yasuda and Ninja Gaiden II Producer Yoshifuru Okamoto, made by Okamoto due to his own claims of harassment and insults at the hands of the president, indicates the board of directors did approve and sign off on the bonuses, and that despite his statements to the contrary, Yasuda himself was fully aware of it.

A second lawsuit, filed by Ninja Gaiden 2 Lead Designer Hiroaki Ozawa and Level Design Lead Tatsuki Tsunoda, claims workers at Tecmo were placed on an illegal "flexible hours" scheme in order to avoid paying them overtime. Yasuda appears to have falsified contracts relating to overtime, according to evidence presented in the suit, resulting in 300 employees losing out on overtime wages over the past two years.

In what may ultimately prove to be a case of "famous last words," after refusing to pay the Dead or Alive 4 incentives, Yasuda apparently told Itagaki, "If you are dissatisfied with the decision not to pay the bonuses, either quit the company or sue it." Itagaki did both, and so far it seems to be working out pretty well for him - and not so well for Yasuda. Following his September 1 departure, Chairman of the Board Yasuharu Kakihara will take over as president, doubtlessly with a mandate to make these lawsuits go away. Whether that will lead to the return of Itagaki at the head of Team Ninja remains to be seen.