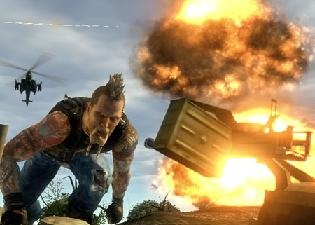 Pandemic is allowing gamers sweet revenge against their archenemy- in-game advertisements - by letting them blow them up in Mercenaries 2.

Mercenaries 2: World in Flames is doing its best to provide a realistic war zone for players, including destructible environments and billboards advertising real-world products provided by game advertising firm Massive. Combine these two features and Massive says you have a "win-win" for both consumers and marketers.

"It's purely a byproduct of gameplay and this notion of a highly destructible environment," said Jay Sampson, vice president at Massive. "Sticking to our ethos of 'do no harm to the game,' we tagged the parts in the environment for ads and like everything else in the game, they can be destroyed. It's mirroring what the studio wants out of gameplay and making the most of it...If we did anything that wasn't destructible [in Mercenaries 2] it'd be awkward. It's taking advantage of the full environment."

Surprisingly, Massive's clients don't have any issues with images of their products being blown to bits if it makes their placement seem more natural.

"[Having the ads be destructible] doesn't have much to do with the go or no-go. It has more to do with the gameplay. Destructible ads actually sell quite well; [advertisers see it] as a way to be engaged with the consumer," said Sampson.

The only reservations come from the game's setting in war-torn Venezuela.

"[The reluctance] has more to do with being involved with a game set in a foreign war-zone," commented Sampson. "They have to be a multinational brand; they're not going to be a U.S. regional player, they have to be ubiquitous."