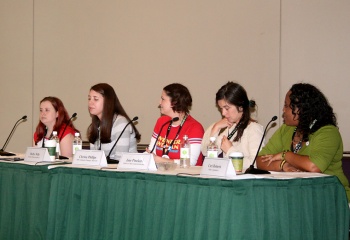 At another well-attended PAX panel on Sunday, five panelists tackled the subject of girlfriends and gaming, discussing the factors that both attract and repel women from games and gaming culture. The panelists, all avid gamers, were Nicole Tanner, Director of PR and Marketing for Foundation 9 Entertainment; Shelby Willis, a producer at Pipeworks Software; Christa "TriXie" Phillips, Xbox Live Community Manager; Jane Pinckard, Editor-in-Chief at GameGirlAdvance.com; and Cori Roberts, editor of Gameinatrix.com.

The event's agenda was driven by audience members, who lined up to both share and seek advice on introducing non-gaming loved ones to their hobby. The panelists were typically quick to respond, offering straightforward commentary, suggestions, and observations from their own experiences. They made it clear from the outset of the panel that despite its title, their remarks applied not just to girlfriends, and not just to women, but to non-gamers of all ages and genders.

Christa Phillips' opening piece of advice was direct and to the point. Too often, she told the audience, "You act like a jerk when you're playing video games." Phillips called out gamers for sometimes letting games "become the enemy" in their relationships. Throughout the event panelists and audience members mentioned non-gamers who had been turned off gaming by gamers whose conduct was offensive or whose gaming activities occupied inordinate amounts of their time. "Play by example," said Shelby Willis. "Lead a balanced life."

Cori Roberts asserted that "everybody has a game," arguing that many non-gamers simply haven't yet been exposed to games they'll enjoy. Jane Pinckard noted that gamers often try to introduce non-gamers to experiences that are simply too hardcore for their tastes, and Willis pointed out that much of the non-gaming public's familiarity with games is limited to titles like Halo.

"Put something on front of them," advised Roberts. Not surprisingly, Nintendo's DS and Wii titles were repeatedly mentioned as gateway games by both panelists and audience members. "Nintendo is basically the answer," said Willis, and she and other panelists followed up with stories of non-gamers in their own lives who had fallen under Nintendo's spell.

Pinckard brought up licensed games, explaining that although serious gamers often rightly disparage licensed titles, many non-gamers will pick up games based on brands they're already familiar with. Later, the panelists delved into the subject of games designed and marketed toward girls. "Moms aren't going to buy games for little girls if they don't know they're meant for them," noted Roberts, explaining the proliferation of "pink" games for the under-12 set.

The panelists also agreed that the stigma sometimes attached to gaming is a significant deterrent for would-be female gamers, and that women and girls are much more likely to get into games if they're introduced to them by their female peers. Phillips mentioned her long-term female-only gaming community project, Xbox GamerchiX, and the panelists noted that the supportive, non-competitive nature of such communities are a major draw for potential women and girl gamers.

A few audience members steered the panel dangerously close to relationship therapy territory, but the panelists kept the discussion on track with a steady output of thoughtful and humorous commentary. The event closed on an optimistic note, with the audience and panelists generally concluding that gaming might not be for everyone, but just about anyone willing to give games a shot will probably find something they like. Avid gamers with non-gaming loved ones need not give up hope.