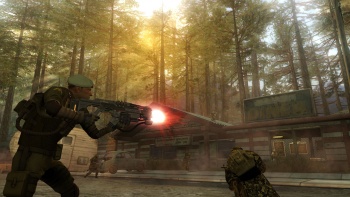 Sony's booth featured numerous kiosks running the latest Resistance 2 multiplayer build, and we had a chance to play a few rounds and get an update on the game from Sony PR. The map on show was a large, brightly-lit forest setting with rolling terrain and several rural buildings.

Sony says Resistance 2's competitive multiplayer mode is on track to provide 60-player battles on expansive maps. To keep things personal, developer Insomniac plans to group players into smaller squads, each assigned to complete certain battlefield objectives. The ebb and flow of each battle will depend on the actions of the individual squads.

According to Sony PR, Resistance 2 will provide players both short and long-term rewards for their competitive multiplayer accomplishments. In individual games players will unlock temporary power-ups that will provide stealth, speed, damage, healing, and other boosts. In addition, there will be a persistent experience and stat tracking system that will allow players to work their way through several ranks. Insomniac hasn't yet announced whether ranking up will provide players with special unlocks or other rewards.

In order to encourage strategic play, Insomniac decided to limit weaponry to two firearms per player. Resistance 2's competitive multiplayer will feature a similar arsenal to the first game, including both familiar and new conventional and alien firearms. Players will select class-based weapon loadouts prior to spawning, but will be able to switch out weapons on the battlefield as they see fit. One weapon that will certainly prove popular is a grenade that can be stuck to opponents and then detonated at will.

It was difficult to get a good feel for the strategic rhythm of the multiplayer matches on the show floor, in large part because they included other PAX attendees who, like me, were unfamiliar with the map and game type. Still, there was no mistaking the fact that the Resistance engine has been through some serious tuning. It's a better looking game, and throughout my hands-on it ran flawlessly, with no noticeable hitches or framerate drops.

Although Resistance 2's overall speed and handling are consistent with that of the original game, the aiming and other combat controls feel more fine-tuned and responsive. Subtle touches, like improved transitions to iron sights and scope views, also improve the game's overall feel.

The original Resistance was a good first-person shooter, and Insomniac seems to have applied their abundant talent to improving it further for Resistance 2. Their plans for the final game include a lengthy story-based single-player campaign which will continue the story of Resistance's main character, Sergeant Nathan Hale. Sony told me players can expect a much more personal story this time around, told from Hale's perspective with more in-engine cinematics.

Resistance 2 will also ship with a cooperative multiplayer campaign which will include scenarios that compliment the single-player storyline. Co-op will support up to eight players at a time, but will automatically scale back enemy numbers to support smaller parties as necessary. Sony also reports that Resistance 2 will include thorough integration of the PlayStation Network's newly added trophy system.

With single-player, competitive multiplayer, and separate co-op campaigns, Resistance 2 is an ambitious step forward for Insomniac, especially when you consider that they cut their modern first-person shooter teeth in 2006 with the original Resistance. Insomniac proved their platformer chops long ago with the Ratchet and Clank series, and they now appear poised to increase their standing as a solid first-person shooter studio. Resistance 2 will launch for the PlayStation 3 on November 4, 2008.