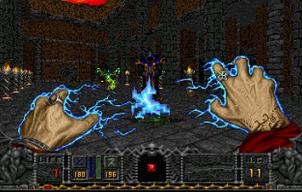 After a decade-long effort to convince Raven Software to open the source for its classic first-person shooters Hexen and Heretic, Raven's James Monroe contacted Doom World with word that the code could be downloaded from SourceForge under the free GNU General Public License.

The team effort to force Raven to unlock Heretic and Hexen included "an online petition, an open letter, snail mail campaigns, e-mail, an international action item on GNU.org, insider efforts by Chris Rhinehart of Human Head Studios and Doom's own John Romero, and other activities carried on individually by countless community members."

Allowing Hexen to be downloaded with the GNU GPL solves a number of legal issues related to numerous Doom modifications made since the game's launch in 1993. Hexen was famous for being one of the first FPS games to offer mouse look, allowing for manual aiming. Future Doom edits, such as personal favorite ZDoom, combined code with Hexen's in a violation of the latter's private, Activision-approved license. Now both Raven games can be freely redeveloped for new software packages to be played on any hardware platform.

Programmers from the 1990s PC era can revisit the Doom days by downloading Activision and Raven's source from its SourceForge page.