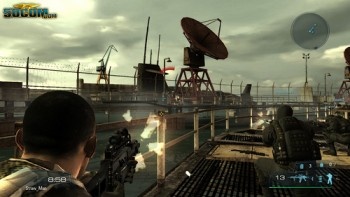 Warhammer Online isn't the only upcoming release facing beta problems: SOCOM: Confrontation servers were shut down this morning as part of the development team's effort to handle "overwhelming demand."

The beta test began on September 5, open to gamers who preordered the title from either GameStop or EB Games. But even with just a "semi-open" beta running, Slant Six, the team behind the game, has struggled with server load problems caused by excessive player demand. "These issues are causing abnormal latency, disconnects, long load times, login errors and community features such as clans and stats not functioning correctly (or at all)," Sony's Seth Luisi wrote in a blog post. "We are doing everything we can to resolve these issues as quickly as possible and you should see some improvements progressively over the next couple of days. However, we do not expect to have the issues completely resolved until close to the end of the week."

The new patch was to be applied at 5 am PDT today, and adds support for European EULAs and dedicated servers in Europe and Australia, and also addresses various stability and "late joining" issues. "The server maintenance and patch are not meant to address all issues," the team noted. "We will have more updates to both the server and client in the future."

SOCOM: Confrontation is a PlayStation 3-exclusive third-person shooter with support for up to 32 players in online action and featuring redesigns of popular maps from both SOCOM and SOCOM II. The game is set for release on October 14.