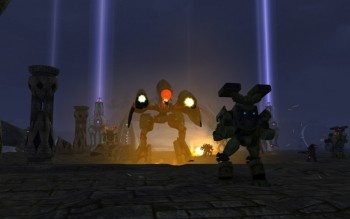 NCsoft's consolidation will likely have an impact on some of its games but contrary to rumors, Tabula Rasa will be unaffected by the changes.

NCsoft announced yesterday that it would be folding its European and North American operations into a wholly-owned subsidiary known as NC West, with a focus on becoming "the world's premier publisher of MMOs." Almost immediately following that news, speculation began that Tabula Rasa, the underperforming MMOG from Ultima mastermind Richard Garriott, would be a victim of the change, but NC West President of Publishing David Reid told Kotaku that's not going to happen.

"This transition is really about ratifying a completely dedicated business to the triple-A titles," he said. "We would consider ourselves in the class of five-ish companies in the world that can be successful in this market. We are a leader here and we are doubling down in those efforts."

Reid added that despite the typically PC-centric nature of MMOGs, the company would also be focusing on its deal with Sony to create online games for the PlayStation 3, saying, "You can expect us to be a big player in the console space." And while Tabula Rasa isn't on the chopping block, other, "lighter" titles are, like the free online game Dungeon Runners. Fortunately, actual job losses resulting from the consolidation will be small: 12 jobs out of 250-260 at the former NC Austin location have been cut, while 58 positions in Europe have been tapped for possible elimination, although the final decision hasn't been made.

Reid claimed the changes would make it easier for the company to work more effectively with publishers on the West Coast and also facilitate travel between the U.S., the U.K. and Korea. "People who love these big-scale MMOs should be thrilled to hear what we're talking about today," he said.