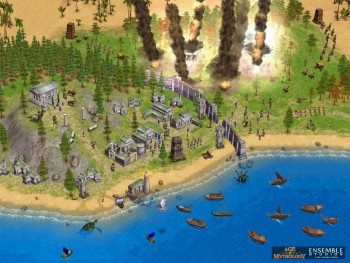 Microsoft has pulled the plug on Ensemble Studios but the company says that doesn't mean the Age of Empires franchise is dead and buried.

Microsoft confirmed yesterday that Ensemble Studios, best known for the Age of Empires and Age of Mythology series of RTS games, would be closed after the completion of its latest effort, Halo Wars. Despite words about the studio's "invaluable contributions to the game industry" and statements that Halo Wars is "on track to being a fantastic game," Microsoft's Shane Kim said the studio was being shuttered for financial reasons "that keeps MGS [Microsoft Game Studios] on its growth path."

But a Gamerscore Blog post by Games For Windows Director Kevin Unangst promised that the end of Ensemble doesn't mean the end of Age of Empires. "As many of you have heard, Ensemble Studios will be closing after Halo Wars is complete," he wrote. "If you're a PC gamer, you've likely played some version of Age of Empires somewhere along the line. I want to reassure you that Microsoft will still own the Age of Empires intellectual property.

"As a company, we're very excited about the future potential for Age of Empires, and as a PC gamer I'm looking forward to what the future holds,"he continued. "Stay tuned."

It's not exactly an iron-clad promise of more Age of Empires, but the implication is pretty strong. Of course, the obvious question is, if Microsoft does have plans for the franchise, why can the very studio that originated the game and made it a success? And where's the love for Age of Mythology?