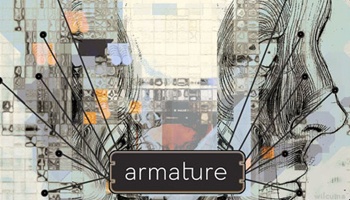 A new game development studio, formed by three industry veterans known for their work on the Metroid Prime series, has just announced an exclusive, long-term partnership with Electronic Arts that will bring a fresh slate of titles to the three major consoles.

Immediately following their surprise departure from Nintendo's Retro Studios in April,
Mark Pacini, Todd Keller, and Jack Mathews formed the Austin, TX-based Armature Studio. The former Retro staffers worked as Game Director, Art Director, and Principal Technology Engineer respectively on the critically acclaimed Metroid Prime trilogy. No longer limited to creating games solely for Nintendo hardware, the trio is in the process of hiring a small core staff and has already begun work on several upcoming projects for EA. There's no official word yet on any specific titles in the works.

"We are very excited about trying to rethink how games are developed for this generation of consoles, and our partners at EA have been nothing but supportive in this pursuit," said Pacini in a press release announcing the collaborative deal with EA. "What really gets me going is that now, no platform is off limits. That is just something we didn't have the ability to do before."

Armature utilizes an innovative new development model designed to pair the creative flexibility of a small-scale independent studio with the financial backing of a larger development studio. This experiment is made possible by the recently announced EA partnership. The core Armature team will focus primarily on creating new intellectual properties and game prototypes. The majority of the development work will then be handled by external teams, according to Pacini, though Armature will still oversee each project. The model aims to cut costs and financial risk, while still being able to create AAA titles with a smaller team. In a recent Kotaku interview, Pacini said the studio is enthusiastic about the experimental plan and is looking forward to seeing how things proceed beyond the early phases.