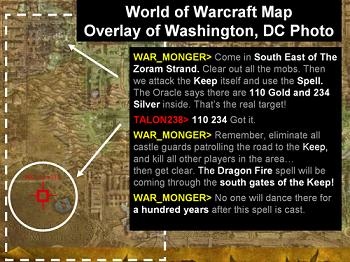 A Washington defense researcher has demonstrated to the Director of National Intelligence Open Source Conference how terrorists could plot future real-world attacks in World of Warcraft.

Dr. Dwight Toavs, a professor at the Pentagon-funded National Defense University, presented his research titled "Emerging Media: Its Effect on Organization" to an audience of government officials on the dangers of virtual worlds used by the country's enemies in plotting further violent strikes.

Toavs and partner Dan Arey of the National Intelligence's Summer Hard Problems explained how one anonymous and seemingly innocent conversation between players in World of Warcraft could be discrete code plotting terrorist acts.

WAR_MONGER: Leading a big raiding party next Thursday! I need to activate your Guild. You up for it?

TALON238: Yes, the warriors have been training and are organized. Everyone's at Level 70 and ready for action.

WAR_MONGER: Good. This is the big one. Lots of XP for everyone! And a ton of mobs to slaughter!

TALON238: That's what we've been waiting for. Where's the raid?

WAR_MONGER: A fun little romp through StoneTalon Mountains. You know the place?

TALON238: Sure, we scouted the area last year in a party, but left because the White Keep was too strong.

WAR_MONGER: Yes, but this time I want to hit the Keep! We will take down the Master Mage and his little Gnome. PvP baby!

TALON238: Wow! To take on that Instance, you must have acquired the Dragon Fire spell?!!!!!

WAR_MONGER: Yes. Last week. In my Inventory and ready to cast. But I need tanks and DPS's to support the raid and clear the guards.

TALON238: We're ready. We just got a shipment of Elite and Epic weapons last month. DPS's have tons of Mana. And the tanks are buffed.

WAR_MONGER: Excellent. The time for the raid is 11:30 am EST. Have everyone online and ready to roll. Rally on me and don't be late! The Alliance may be listening, so only communicate in Whisper mode.

TALON238: Of course. The whole Guild will be there and at your command. Where do you want us to gather?

WAR_MONGER: Come in South East of The Zoram Strand. Clear out all the mobs. Then we attack the Keep itself and use the Spell. The Oracle says there are 110 Gold and 234 Silver inside. That's the real target!

WAR_MONGER: Remember, eliminate all castle guards patrolling the road to the Keep, and kill all other players in the area... then get clear. The Dragon Fire spell will be coming through the south gates of the Keep soon after!

TALON238: Got it. The Horde can't wait to see it burn! The Gods willing, we will succeed and dance on its burning rubble!

WAR_MONGER: No one will dance there for a hundred years after this spell is cast. The Gods and their magic are with us. The White Keep is vulnerable. Good hunting!

A closer examination of the language used reveals hidden messages. "StoneTalon" is Washington D.C., "White Keep" could be the White House, "Dragon Fire" and the "Elite" and "Epic" weapons are the weapons to be used and "110 Gold and 234 Silver" are coordinates to match the World of Warcraft map with one of the city.

In the future, as the ongoing "war on terror" evolves and the technology terrorists implement become more complex, Toaves expects intelligence agencies to spend more time focusing on virtual worlds.

Steven Aftergood, an analyst for the Federation of the American Scientists, commented, "This concern is out there. But it has to be viewed in context. It's the job of intelligence agencies to anticipate threats and counter them. With that orientation, they're always going to give more weight to a particular scenario than an objective analysis would allow. Could terrorists use Second Life? Sure, they can use anything. But is it a significant augmentation? That's not obvious. It's a scenario that an intelligence officer is duty-bound to consider. That's all."

The partners' Powerpoint can be downloaded here at Wired.