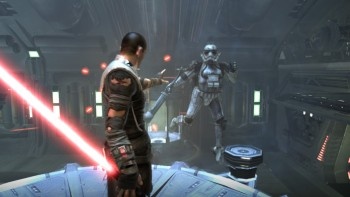 Star Wars: The Force Unleashed may not be a great videogame, but does it have the makings of the next great Star Wars movie?

Haden Blackman, project lead on The Force Unleashed videogame, thinks it's a great idea. "Oh, that would be incredible," he told the L.A. Times. "And it's not impossible. Never say never. George [Lucas] has looked to tell new Star Wars stories through the games and with the entire Star Wars Expanded Universe, and then he has also shown a willingness to let the characters come into the films. Look at Aayla Secura, a creation in the comic books who became part of the theatrical films."

In fact, the latest Star Wars movie, Star Wars: The Clone Wars, began life as an animated series for television before Lucas decided to put it on the big screen, and despite earning less than stellar reviews the report claims, "Lucas doesn't seem to care a bit about the opinion of any detractors when it comes to his historic entertainment enterprise and its directions."

Considered across the entire breadth of the "multimedia project," The Force Unleashed offers significant levels of detail that would facilitate a move into theaters. Along with the game, there is a Force Unleashed graphic novel, written by Blackman and published by Dark Horse Comics, and a hardcover novel written by Sean Williams. Blackman added that if a movie translation was to happen, it would be a testament to the "sophisticated ideas" of the development team, which gave equal weight to both storytelling and gameplay in The Force Unleashed. "It's an incredible time to be telling powerful stories in this fairly young medium," he said.

Ironically, the likelihood of a successful Force Unleashed movie depends largely on how willing Lucas is to stay hands-off and let other people handle the job. The best Star Wars projects to come out since Return of the Jedi have been those Lucas wasn't directly involved with; "You can type this shit, George, but you sure as hell can't say it," is a lesson that never seemed to sink in. I haven't played The Force Unleashed, so I can't really say whether it'd make a good movie or not. I will say this, however: It can't possibly be any worse than the last three pieces of crap Lucas and the gang shoveled out the door.