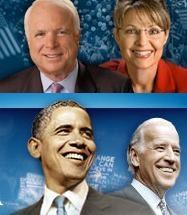 Microsoft's promotion of the "Rock the Vote" campaign over Xbox Live seems to be successful promotion of the 2008 United States presidential election, if the turnout of voters for a preliminary poll is any indication.

A poll of 100,000 Live users, more contributors than Gallup, NBC and CNN polls combined, asked gamers to select their nominee for president.

Additionally, the "Rock the Vote" campaign distributed over 55,000 voter registration forms over Xbox Live, 350,000 pieces of digital candidate schwag such as gamerpics, videos and "Rock the Vote" logos and 25,000 video downloads of the Republican and Democratic national conventions.

Despite being non-scientific (potential for multiple account abuse and the historical liberal leanings of young voters and technology enthusiasts), the numbers definitely reveal a large lead for the Democrats in the aforementioned demographics. More surprisingly is the large number of "Other" voters, most of which are probably Ron Paul holdouts hoping he can form some sort of write-in comeback.