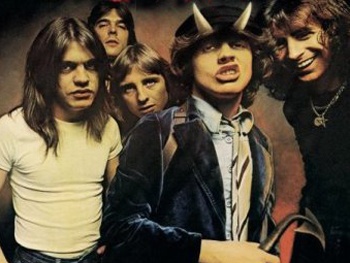 For those about to rock...you'll have to drive to Wal-Mart.

The recent inclusion of AC/DC's "Let There Be Rock" in Rock Band 2 is only a taste of what's to come. Indeed, the mighty goblet of rock will soon spill forth, overflowing with voluminous amplitude. According to the New York Times, later today, MTV will announce an exclusive deal with Wal-Mart to release the upcoming AC/DC Live: Rock Band Track Pack for Xbox 360, PS3, PS2, and Wii. The Rock Band expansion dovetails with a larger partnership between the chain store and the seminal rock band to promote the group's upcoming Black Ice album - also a Wal-Mart exclusive.

Inking a deal with Wal-Mart is like signing on the dotted line with Satan, but that never seemed to be much of a problem for the aging yet sonically potent hard rockers. How else would they still be pumping out the deafening anthems, after more than three decades of bringing the noise?

"They rock hard, and that still works for our audience," said Van Toffler, president of MTV Networks' Music. "It comes down to getting really great marketing, because Wal-Mart is so meaningful in terms of sales if they get behind something."

As meaningful as a giant, all-consuming corporate chain store juggernaut can be. Containing 18 songs from the band's DVD AC/DC Live at Donnington, the track pack will ship in November with a price tag of around $30. Soon enough, you too will be able to reenact the video for "Thunderstruck" from the relative safety and comfort of your living room. Though a little brief, the full track-list is scorching hot.

View From the Road: It's Time to Grow Up John Funk 175 Comments