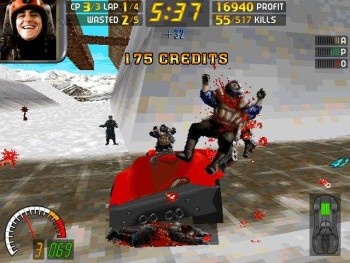 Insurance giant Allstate has launched a program to discover whether videogamers make better drivers and should be eligible for a "button-masher discount."

Of course, it's a little more complicated than just getting a better rate because you spend a few hours with Halo every week. The insurer has launched a program called InSight that uses specialized game software from Posit Science, a company that designs and develops "effective, non-invasive tools" to help improve brain health. CNN says 100,000 Allstate customers in Pennsylvania, aged 50-75, will be offered the games, and as their playtime is tracked by the developer, their accident rates will be analyzed and compared to people who did not play the games.

The games aren't actually driving-related; they're designed to help reverse "age-related cognitive decline," part of a genre more commonly known as brain trainers. One, called Jewel Diver, requires players to keep track of underwater jewels that are hidden under fish, a Three Card Monte style of game that becomes more complicated as the game progresses and more fish appear on the screen. Unlike most brain training software, however, the InSight software is designed to actually reverse age-related decline and also greatly improve visual alertness.

Tom Warden of Allstate said that people in their 50s and 60s have the lowest accident rates of all drivers, but that rates begin to climb once people hit their mid-60s. He added that he hopes this program can show "significant benefits here - beyond dollars and cents." InSight is currently only available in Pennsylvania, but the company will decide next year whether to introduce it to other states, and if it proves successful Allstate says it hopes to begin offering discounts to drivers who use the software to improve their "mental sharpness."

Playing For Our Future Jason Della Rocca 32 Comments
Comments on