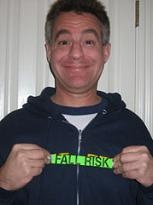 Jeff Green, the former Editor-in-Chief of Games for Windows magazine, has left journalism with the message that "print is in trouble."

Shortly after leaving his job at 1Up running the remains of the Games for Windows brand online following the magazine's closure, Green appeared on the Gamers With Jobs Conference Call to discuss why so many industry publications are failing or struggling to survive.

"I think that print is in trouble. I'm no genius, this is no revelation. You see it across all media. This isn't just gaming. I canceled my subscription to my local newspaper because I'm reading all my news online, so it's not like any of us are immune to that or not responsible in some way," said Green. He went on to say that the challenge for gaming mags in particular is staying relevant for a tech-savvy audience.

"How do you come out every four weeks with a magazine you made six weeks earlier and still be relevant?" asked Green. "That's my biggest frustration with what happened with Games for Windows magazine. [The team] and I had actually started to figure that question out. We can't compete on this level, we can't provide them updated news. We can't provide them timely reviews. Screw it, let's not even try. You can't even pretend anymore that you're not in the internet age, you just go with it. We tried to do alternate features, longer interviews, things that the web is actually not good at. You don't get people to click on page after page in an interview. I felt that at the end of our run there we were just getting to this place where we were justifying our existence. 'Okay, we know you're on the web all day, that's cool, so are we. Here's this every month to go along with that.'"

If any one thing was to blame for the fall of GFW, continued Green, it was the loss of ad revenue as advertisers found other places to spend their money. "This is where the success of gaming in mainstream culture hurts the niche. If EA knows that they can spend their ad dollars on a Madden ad that will reach how many millions of people on TV, it's less important to put an ad in a niche hobbyist press. They don't need it now, it's not their priority."

For more thoughts from the former Editor-in-Chief, read Jeff Green's writings on his personal blog.

" Game Magazines Have Sucked for Forever ": GFW's Jeff Green on the Future of Print Media Sean Sands 7 Comments
Comments on