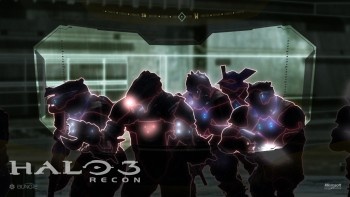 Halo 3 Recon isn't going to be a full-length game, but Bungie says it will be their "final statement" on the Halo trilogy.

In an interview with Eurogamer, Bungie PR Director Brian Jarrard said Halo 3 Recon is "not a full, entire game like Halo 3," although it will offer "a lot of value" despite being shorter than a standard release. "There will be a lot of replayability as well; we have tons of new Achievements, four-player co-op, all the social features we had in Halo 3. It's a standalone disc as well, so you won't have to have Halo 3 to experience Recon."

Jarrard also explained that while the initial Halo 3 Recon press release said players would need to employ "stealth and cunning," the statement referred to the fact that the central character was an Orbital Drop Shock Trooper rather than an enhanced Spartan trooper. "It's not to be confused with the stealth genre. This is certainly not a Splinter Cell; this is definitely Halo," he said. "I believe what that particular release is getting at, is playing as an ODST rather than an indestructible Master Chief super-soldier, there will be some different tactics to employ. It will feel familiar, but it is going to be a different gameplay experience."

And while fanboys will no doubt be clamoring for more, Jarrard said in another interview with GamesIndustry that Halo 3 Recon would be Bungie's "final statement" on the Halo trilogy. "We've already put a couple of map packs out, we do have more maps on the way. We actually have a Mythic map pack coming out early next year. We don't have firm details or a date yet, but we do have one more map pack coming out, and then we do have some maps associated with the actual Recon retail release," he said. "But I think when this project wraps up in a couple of months that will be the time when that team moves on to something else - part of that team will move on to something else and part of them will probably be absorbed into one of the other projects that are already on the way."

Despite that, Bungie won't be walking away from Halo anytime soon. "Obviously apart from the retail products release we're updating the matchmaking playlist every month on Xbox Live, we're adding fun 'Double XP Weekends' and we just rolled out a bunch of achievements that are all retroactive so people that bought our map packs previously now have about 250 new gamer points to go and achieve," Jarrard continued. "So it's fan service for us - the audience is there, they demand it, we're still having fun with it, so we're just going to keep going for as long as we can."