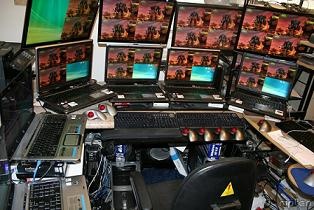 In one of the most impressive acts of geekness ever confirmed, one dedicated World of Warcraft raider has organized a personal command center with eleven computers running some of his 36 different characters so he can play alone.

World of Warcraft is a massively-multiplayer online game, which implies that players will be palling around with hundreds of others in an online world. The situation becomes trickier if you're the sort of antisocial gamer who doesn't like gaming with strangers, but enjoys MMOGs.

The Bradster is one such fellow who has devised his own solution to this solitary conundrum: spend your way to private virtual experience.

For $5,711 a year, comprised of 36 separate accounts on a six-month subscription schedule, not to mention additional costs for the eleven computers simultaneously running World of Warcraft, Bradster has built himself a digital fortress, an army of electronics that might make MI6 tremble. When the expansion Wrath of the Lich King is released, he expects to drop another $1,500 for 36 copies to transfer his characters to the additional content and kick more Alliance ass.

Bradster explained his reason for wanting to run his own Warcraft army, "The main reason is to invade Stormwind and Ironforge when they reach top level. I'm sure the Alliance will put up a big fight when that happens. We'll see how it goes. If they don't make level 70 before Wrath of the Lich King, then it will be at level 80. That is my main goal. That will probably happen after I've got some PvP gear from the battlegrounds."

His characters are comprised of 33 shaman, most at level 61, and a priest, mage and druid around level 23.

Using the program Octopus and other macro keys across one keyboard and mouse combo, eight of his eleven computers can be controlled at once, allowing for the simultaneous action and instances across all screens.

There are many impressive feats of gaming where people stock their shelves with classic games, perhaps spending fortunes for rare titles or hours in an arcade to set a world record. However, it is even rarer to find one who dedicates so much time and money for the sake of playing alone in a multiplayer-only game.

The entire expensive ordeal is worth the investment to the Bradster, who claims that he's "looking at it like it's a hobby and there are more expensive hobbies out there than World of Warcraft."